FALL-ing for the Sisters at Ariel 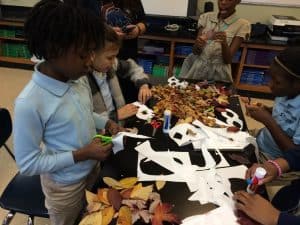 The first month at Sisters4Science has been so fun! We made ice cream, invented our own planets with organisms, and spent a day embracing fall and learning about plants! The girls have been so welcoming for my first month working with them; I am so excited for all we have planned for the rest of the year! Making ice cream was a class favorite. We learned how the salt actually makes the ice colder than the freezing point of normal water, so that the milk becomes ice cream faster. The girls endured holding the freezing cold bags to make the ice cream. It was worth it in the end since the ice cream was so delicious! Haniyae and Alaijah made an awesome slow motion video of them shaking the ice cream. It was a great day to start to get to know the girls over everyone’s favorite food! Our ice cream social helped break the ice for the start of a great semester! The next week, we went out of this world and talked about the possibility of life on other planets. More specifically, we talked about what qualities a planet needs to have to support life! In groups the girls received a description of a planet, and with art supplies and clay they came up with organisms that would live on that planet. Faith and Gloria made a male and 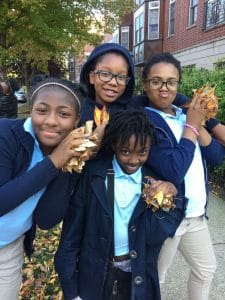 female pair of a coyote like animals that lived in the desert on a planet much like earth but with two stars, like in Star Wars. “We made both because the male looks different from the female so they can be differentiated. They have large ears to keep them cool like the foxes in the dessert here.” Faith explained to me about their animals. All of the girls made incredibly creative organisms and almost equally impressive pictures of what they imagined their planet to look like. 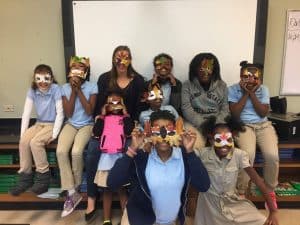 The week before Halloween we took advantage of the falling leaves and the upcoming holiday and created masks out of leaves we found outside. Some of the girls created masks that looked Venetian, some made masks that looked like a super hero mask, and we even had one nature robot mask! It was great to see what these girls could create using what they found right outside their school! We also planted grass seeds in CD cases so we can watch the entire germination process. So far Sisters4Science at Ariel has been a blast! And there is still so much to look forward to!