While employment opportunities in STEM are outpacing other types of careers, opportunities in STEM education remain blocked for students of color and girls. Our experience has shown us that students are curious and interested in STEM, however, youth from undeserved communities in Chicago face systemic challenges to accessing high-quality programs, such as academic prerequisites or program fees.

estimated increase in STEM career opportunities in Illinois from 2014-2024

82% of students identify as female.

72% of PE participants are African American.

28% of students are Latino.

ADDRESSING THE EFFECTS ON YOUTH

Youth joblessness disproportionately affects young people of color. While generations before them in the neighborhoods we serve relied on industrial and manufacturing jobs, the landscape of such opportunities has drastically shifted. A dramatic loss of jobs has occurred and young people lack pathways to other opportunities. Challenged with poverty, under-resourced schools, and high rates of trauma, youth feel pressure to seek economic solutions in arenas available to them, which often lead to violence. 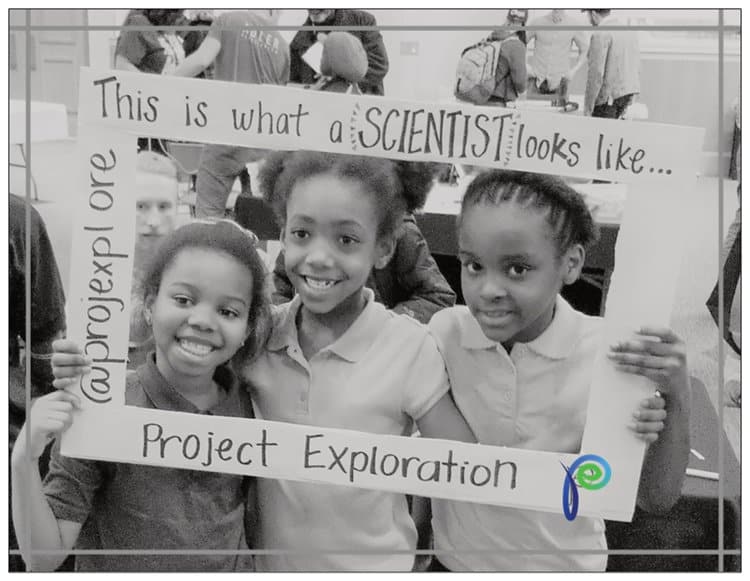 By fostering relationships between STEM mentors, students develop connections with caring adults who encourage them to discover, explore, and pursue STEM learning opportunities and careers via our:

OUR EFFORTS ARE WORKING!

A ten year longitudinal study revealed that our students are three times more likely to enroll in a four-year college than their peers, and over one-third of Project Exploration alumni major in a STEM-related discipline.

95% of PE participants have graduated from high school, or are on track to graduate.

32% of past participants hold science-related employment.

85% of students say that PE introduced them to educational options they had not considered.

With your help, we can ensure continued equitable access to STEM programs and careers to every Chicago student. Please support Project Exploration in bringing more transformative learning opportunities to young people underrepresented in the sciences.

Together, we can ensure young people like Alquan, Anisha, and Malik can continue to shape the skills, practices, and mindset for a lifelong pursuit of learning. 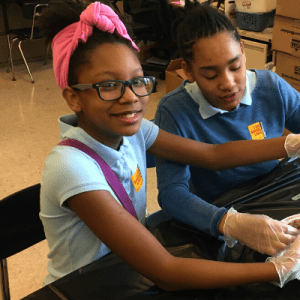 Anisha is a very loving and kind young girl who excels at hands-on problem solving and keeping her brother and cousin in line. Where others might see bossy tendencies, her PE STEM facilitator sees leadership qualities. When she first joined our Girls Who Code program, however, Anisha was shy and preferred to follow the crowd. It was easier to disengage and express disinterest than it was to try something new and have to ask for help. She might have joined the day’s activities with lots of encouragement, but she was the first to throw up her hands if she didn’t immediately succeed at something. “I don’t have to be here,” she’d remind Ms. Tara. Throughout the program, however, Ms. Tara realized that what Anisha was lacking wasn’t interest or perseverance, but trust which she quickly won by being a consistent mentor. “She’s extremely helpful now, opening doors, helping with check-in and clean up.” While she still requires assistance when she tries something new, she also knows to ask for help and that Ms. Tara will be there to help her problem solving skills shine. 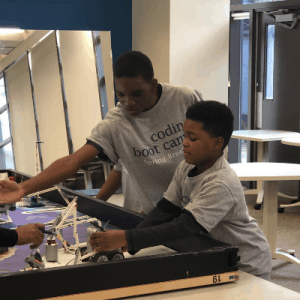 Alquan, Anisha’s very smart and energetic big brother, wears his emotions on his sleeves. Like his sister, when he first joined PE’s programS at the Westside STEM Learning Center (SLC), he used to get frustrated easily. Rather than giving up, however, he’d take it out on his instructors and peers. As tough as his exterior often appears, however, our talented team knew that Alquan could succeed if they consistently reinforced expectations and helped him develop coping mechanisms. After two program cycles, he now knows he can choose to talk it out or sit it out when he gets upset. Once developing these social and emotional skills, inquisitive Alquan began to excel in program. He recently came to appreciate the practice of trial and error as he worked persistently to get his robot ready for competition. “You gotta follow instructions first, you can’t just build a robot.” This tough young man who once hated following the rules is now first to help Ms. Shnesa get other students back on track. Watching this grinning boy ecstatic to show his mom his robot at the year-end robotics competition, it was hard to recall the tough young man we met who challenged all the rules and didn’t see his place in Robotics. 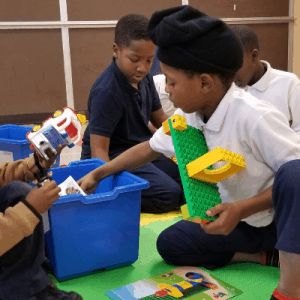 Malik is Alquan and Anisha’s young cousin who inspired Project Exploration to bring programming for younger students to the SLC. Although shy at first, walking in the footsteps of his cousins, Malik has since shown our team a more independent, inquisitive, and open side of himself. “When you ask him about a problem, he’ll give you the solution,” said Ms. Tara of how Malik has grown in the program. Similar to his cousins, trust is something to be earned. However, it didn’t take him long to trust and seek the attention and approval of his STEM facilitators. Although he cruises through activities and catches onto new concepts quickly, they feel he often shares that he doesn’t understand just so they can come over and appreciate how well he’s doing. With their encouragement, he continues to become a leader in program and will now jump in to help other students when he’s completed his own work. During a recent visit at the SLC, PE’s Executive Director found Malik busily working on a project and asked his what he was doing. No longer shy or in need of his cousins’ encouragement, he hurried through an explanation of the problem he was solving before proudly exclaiming, “I’m a scientist!” Malik’s STEM identity continues to emerge every day.

The faces of science are changing, however, access to opportunities in STEM continue to be blocked for hundreds of Chicago Public School students. With your help, we can help more young people like Malik explore the possibilities in STEM and discover their identities as scientists. Please consider a donation today.

We believe that STEM has the power to:

To steer youth from violence.
To break the cycle of poverty.
To make bright futures possible.

And you can help!