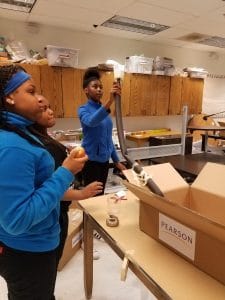 It’s November, and we spent a couple of weeks learning about and designing Pin-Ball Machines. This was a fun project as the girls learned not only what a pin-ball machine is but how to build one and some of the founding principles of mechanical engineering as well. 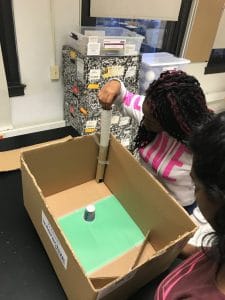 We started out discussing Mechanical Engineers and what they do. The girls at Spencer learned that Mechanical Engineers, in general, work with moving parts, which fit into our lives in the shape of machines and vehicles, like cars, and also in the buildings we use, like in elevators and our heating and cooling systems. Once we discussed Mechanical Engineers, we were ready to learn about pin-ball machines. Not all of the girls knew what they were, so we watched a video on how they work and then another about how to build one out of cardboard. Before watching the “How to” video, Aaliyah was asking why she needed to watch it. One of her Sisters4Science team mates told her it was so she could get some ideas of how to make one. Aaliyah didn’t say much, but was so engrossed in the video once it started playing, that not even jokes and laughter from the other girls could distract her. At the end of the video, she announced, “This is what I’m making – one exactly like this!”. It was heartwarming to see her to interested in the project. All of the girls had a good time thinking through the project, working in teams, decorating their boxes, and then showing them off and taking turns to play on the different models. They are having so much fun and learning so many new things!